The Camel Back Mountains 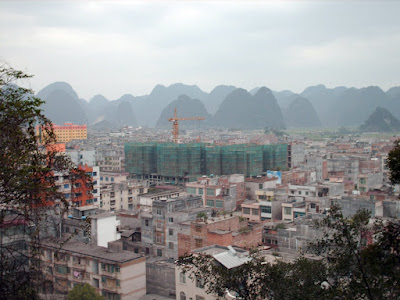 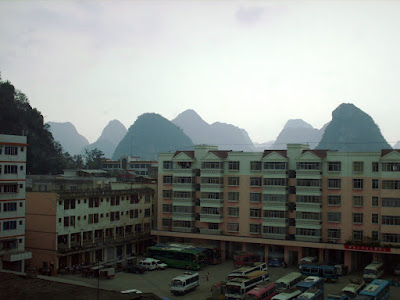 I went to southern China in 2007 where I had the pleasure of traveling through what is called the foot hills of the Himalayas. The Zuang people, the largest minority group in all of China, call this range "The Camel Back Mountains."
These giant limestone hills jet directly up out of the flat lands making them look like large camels humps. They are spectacular to see in life so much so that I felt compelled to make them somewhat of a center piece of Awakening. This range is located near the border of China and Vietnam.
at June 10, 2009 No comments:

In addition to the novel I am creating an original score to coincide with the book. So far I have written and recorded three songs:
I have had an amazing time writing these songs. The best part is that these tunes are what I've heard in my head as I've been writing the book. For instance, the main theme was a prevalent tune I heard as certain important items are discovered on Ethan and Eisley's journey and as they adventure of into the Camel Back Mountains. Once I have finished mixing these songs I'll put them up on the site for download.
I intend for this soundtrack to be listened to as you read the book to add another dimension to the story. Where did I get this idea you might wonder. Well, I once read a Star Wars book called Shadows of the Empire that took place between The Empire Strikes Back and Return of the Jedi. Shadows had a soundtrack that accompanied the book, which I purchased along with the novel. As I read the book and listened to the soundtrack that was composed specifically for the different scenes from the novel I fell in love with the combined experience. Let me be quite clear that my soundtrack will not be nearly as epic as the Star Wars soundtrack becuase I am not the London Symphony Orchestra (sorry to disappoint).  I do believe, however, that it will be a great thing to own along side the book.
at June 10, 2009 No comments:

Hello,
My name is Dylan Higgins. Over the past year I have been writing the first book in a trilogy called The Emblem and The Lantern. Book one is entitled Awakening. I'd briefly like to explain how this project came to be:

About two years ago me and a friend (Mike Sherrard) had decided that it would be fun to author a children's book together. We started kicking around ideas for an illustrated short story concerning a hero and a magic lantern. That idea never really came to fruition as both Mike and myself were to busy to begin. The project sat in a rather dormant state for a year; however, in June of 2008 I began to think on the story again. During the summer months I began to tell my children different stories surrounding the magic lantern all the while making Ethan and Eisley the characters. Through the time spent telling my children about the lantern they became a part of the story which led me to write a synopsis of the first part of their adventure with the lantern.
It is now June again. One year since I brought the novel idea out into the open again and now I have completed fourteen of the chapters that comprise Awakening. I will be using this blog as a way to share with others the experience of writing my first book. From this site you will be able to discover where many of the influences behind the characters and landscapes in the book. I hope that, through this site you will become interested in the world that is being created through this writing experience.
Sincerely,
Dylan
at June 10, 2009 No comments: